The following are Symptoms of Low T. If you answer "yes" you may benefit from Hormone Replacement Therapy.

1. Do you have a decrease in libido (sex drive)?

3. Do you have a decrease in strength and/or endurance?

4. Have you lost height?

5. Have you noticed a decreased "enjoyment of life"

7. Are your erections less strong?

8. Have you noticed a recent deterioration in your ability to play sports?

9. Are you falling asleep after dinner?

10. Has there been a recent deterioration in your work performance?

Testosterone is a vital part of male health. Testosterone and other important hormones are responsible for mental clarity, muscle building, energy, a healthy sex drive, and much more. Advanced Healthcare assesses male hormones and health with up to twenty laboratory tests and a physician assessment. Then we will recommend a personalized proactive health program that will help you optimize your health, look better and feel younger.

American Men are Losing Their Vitality

Male Andropause: What You Need To Know

Andropause is a biological change characterized by a gradual decline in androgens experienced by men during and after their mid-life. ~ The Endocrine Society.

For decades, women have used hormone treatment to prevent disease and retain the attributes of youth. Menopause, one of the surest signs of aging illustrates a painful period women endure as they fight ailments such as hot flashes, dry skin, mood swings and wrinkles. Even women lose muscle mass as they age. These symptoms usually afflict them as they reach the age of 50.

Could it be that a similar passage exists for men? Does this natural condition, which is built into women at birth, exist to some degree in male genes?

According to the Harvard Medical School, the difference between males and females is very small. It resides on just one gene in the Y chromosome, the sex-determined region Y (SRY).

“SRY is the tiny bit of DNA that’s required for the production of testosterone, and without testosterone, every fetus would be born looking like a girl even if it had a Y chromosome.”

Thus, testosterone is part of a group of male hormones called Androgens, which give men their physical characteristics including body hair, muscles, strength and larger body, mass. The term Androgen is a Greek word, which essentially means “man-maker”.

The production of Androgen is complex. The hypothalamus, an area in the brain, secretes gonadotropin-releasing hormone (GnRH) also known as luteinizing hormone-releasing hormone, LHRH). This acts on the pituitary gland which is close by. Hormones are chemicals that are produced in one part of the body before traveling to another part to do their work. GnRH is a true hormone, but it doesn’t have a long commute; it acts on a nearby part of the brain, the pituitary gland.

As this gland responds to GnRH, the two additional hormones are secreted including follicle stimulating hormone (FSH) and luteinizing hormone (LH).

“FSH and LH were named for their effects on ovaries, but they are every bit as important for men; both act on the testicles, where LH triggers testosterone production and FSH, acting with testosterone, stimulates sperm production,” says the Harvard Medical Review.

The production of Testosterone gives males their deep voice and helps build big muscles. However, it also affects the behavior of men including aggressiveness, libido and sex drive. It may even affect the liver and contribute to towards the production of cholesterol. It’s important to realize that even women produce Testosterone in smaller degrees via the Adrenal gland.

During its role in controlling the metabolism of the human body, Testosterone may convert into something called estradiol, a primary female hormone. This final conversion may take place largely in fat cells, which is why obese males (and females) have higher estrogen levels than lean men (and women).

As men approach the age of 40, the production of Testosterone slows down by as much as 50%. This results in a number of age-related symptoms that are the male equivalent of menopause. 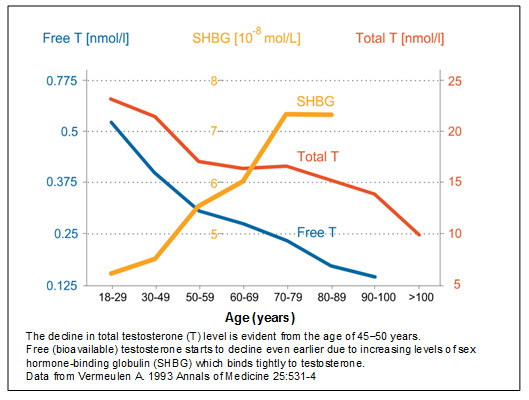 According to the Harvard Medical Review, aging men may lose 10 to 20 pounds of muscle, 15% of bone density, and almost 2 inches of height. It gets worse:
Red blood cell counts also drift down as you age. Sex drive shoots downwards and erectile dysfunction may also rear its ugly head!

Due to “Lower T” the average male may also experience other Andropause-symptoms including atherosclerosis, diabetes, hypertension, prostate disease, and psychological disorders.

Therefore, the phrase “Male Andropause” may be contentious but the symptoms and side-affects are very real. While women may have garnered the lion’s share of sympathy for menopausal-related conditions, men need to be very careful about their bodies as they pass the age of 40.

It’s for this reason that new Hormone Replacement Therapies have been developed specifically for men to combat the affects of Andropause and aging. Testosterone is the key Androgen that Advance Healthcare uses to get your body back into balance. Under the direct supervision of an onsite medical provider, male patients undergo a rapid transformation that positively affects both their body and mind

We look forward to hearing from you

WHERE IS YOUR PAIN?

Learn how we can help with your pain

Head and Neck
Upper Back
Shoulder or Clavicle
MID-BACK
LOWER BACK
Elbow, Hand, and Wrist